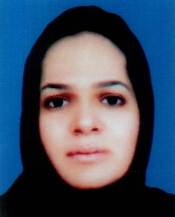 Basma Riaz Choudhry also spelt Baasima (Urdu: بسمہ ریاض چوہدری) was a Member of the Provincial Assembly of Punjab. She is the daughter of Chaudhry Riaz Asghar, ex- District Nazim. M.B. Din (brother-in-law of Ch. Shujaat Husain). She took part in the general elections 2008 from the Constituency PP-117 (Mandi Bahuddin-II) as candidate of Pakistan Muslim League (Q) for the 2nd time, but was defeated by the PPPP candidate Asif Bashir Bhagat. She belongs to PML-Q.

She is the niece of Chaudhry Shujaat Hussain.

Mrs Baasima Chaudhry wife of Mr Naveed Bilal Ch was born on March 5, 1977 in Chicago, USA. She graduated in 1998 in Business Administration (Marketing, Management and Entrepreneurship) from University of Illinois, Chicago, USA and obtained the degree of M.A in Human Computer Interaction from DePaul University Chicago, USA in 2001. A business woman, who remained Member, Provincial Assembly of the Punjab during 2005-07 and has returned to Punjab Assembly in general elections 2013 against one of the seats reserved for women. She served as Senior Systems Analyst, during 1999-2001; and as Consultant, during 2001-04 in Chicago Board of Education. Her father, Ch Riaz Ashgar was Member of Punjab Assembly during 2002-05; and served as Chairman, District Council Mandi Bahauddin during 1997-99; and District Nazim, District Mandi Bahauddin during 2005-10. Her grandfather, Chaudhry Faiz Ahmad was Member, Provincial Assembly of the Punjab during 1985-88 and functioned as Parliamentary Secretary for Transport; and her another grandfather, Ch Muhammad Ashraf served as Member Punjab Legislative Assembly during 1937-45. Her great-grandfather, Ch Ghulam Muhammad remained Member, Punjab Legislative Council for two terms during 1921-26.