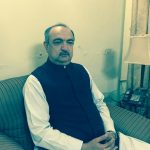 He was born on 1958 in Mianwal Ranjha, Mandi Bahauddin in Punjab, the son of Chaudhry Sultan Ahmad. He received his Intermediate from Mandi Bahauddin. He is Senior Vice President of Pakistan Muslim League. He is an agriculturist, and was as a member of District Council in 1983, 1991 and 1993. He was elected to the Provincial Assembly of the Punjab in 1997, and as a Member of the Provincial Assembly (MPA) of the Punjab from PP-101 in 1997 till 1999.

During his tenure as MPA, he has worked for education sector by promoting girls school and colleges in Mandi Bahuddin and provided all resources for the development of schools and colleges. He has also improved and developed the infrastructure of Mandi Bahuddin.