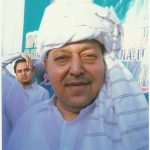 Dewan Mushtaq Ahmed (Urdu: دیوان مشتاق احمد‎) (born September 23, 1949 at Mandi Bahauddin) is a Pakistani politician. He received his Intermediate from Mandi Bahauddin, and is the son of Dewan Muhammad Ishaq. He is an agriculturist, who also have served as Chairman, Municipal Committee of Mandi Bahauddin for six years.

Also elected as a MPA (PML-N) to the Punjab Assembly (1997-1999). After 12th October, 1999 the General Musharaf’s military coup when all the MPA’s and MNA’s of the district went underground and many joined the ruling party he was one the few PML-N Parliamentarians who choose to remain loyal with his party (PML-N) despite lucrative offers from PML-Q and raised his voice against the military rule of General Musharaf.
Was the first one in Punjab who did press conference and challenged the dictatorship of General Musharaf and raised the voice of justice, and challenged to prove even a single penny of corruption against me will go to jail myself and will offer my head to hang till death. Raised the PML-N party flag in every event, suffered the jails and tortures but remained loyal to the party.Served as the District President PML-N Mandi Bahauddin.
00923314806633
4 Views
0 Rating
0 Favorite
0 Share
Politics