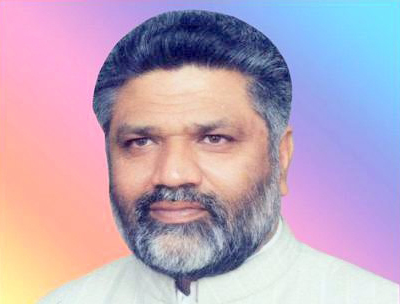 Muhammad Binyamin Rizvi
پیر سید محمد بنیامین رضوی
Pir Syed Muhammad Binyamin Rizvi (Urdu: پیر سید محمد بنیامین رضوی)date of Birth 15 Aug 1959 date of Death 24 June 2004) was a Pakistani politician. He was the oldest son of Pir Syed Mohammad Yaqoob Shah (a famous spiritual and religious scholar, and member of the provincial assembly who died on 31 August 1991). On 24 June 2004 he was brutally murdered in Lahore near his House. He is buried next to his father late Pir Syed Mohammad Yaqoob Shah in his home town Phalia.

Rizvi received a degree in civil engineering from the G.C.T Government College of Technology, Lahore in 1980, and a degree from Allama Iqbal Open University in Islamabad in 1981.

He was elected as a MPA (Member of the Provincial Assembly) of the Punjab in 1991 after his father death. And in 1997 he is re-elected again as a MPA from PP-99. in his very 1st term he served as advisor to the Chief Minister Punjab in 1992, and in 2nd term he became Minister for Social Welfare, Women Development and Bait-ul-Maal of Punjab until the proclamation of Emergency in 1999. In 2001 he became vice president of PML(N) Punjab and he held that seat until his death in 2004.