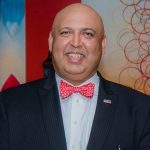 Sajid Tarar is a businessman and social activist and according to him he is an advisor of America’s President Donald Trump. Sajid Tarar, who gave the closing prayer at the Republican National Convention, is the founder of a group that calls itself “American Muslims for Trump,” according to The Washington Times newspaper.

Tarar attended law school in the United States after moving to America from Pakistan, and he became a U.S. citizen in the 1990s. The newspaper says Tarar “owns real estate, works for an organization ‘that deals with senior citizens,’ and is married and has four kids — one of whom, is a top squash player.” He lives in Maryland and is from Baltimore and is the CEO of a business called CSC. Fusion describes that as “a nonprofit that provides care for elderly and developmentally disabled people.”  He started and organization named as ‘ Supporting Trump’ Tarar explained why he started the organization supporting Trump. “As Muslims, we have a hope that Trump can guide America toward the right direction,” said Tarar, 56, to Fusion. “He’s rewriting history.”

Tarar describes himself as an aggressive businessman, and says he has “won two national awards from Exxon Mobil. I also have served on BP Advisory council. I have served on Gas Dealer association Board of Directors and have helped Exxon Mobil Business improvement Council.” In addition to other entrepreneurial ventures, he managed/owned “four ExxonMobil outlets.” He also said he served on finance committees of governors and congressmen “including the current Governor Martin O’Mally (sic).” He writes that he is president of Maximus Investment Group, an organization, “Specializing EB-5 Visas.”

Muslim immigrant Sajid Tarar delivers prayer at convention. He said that “Let’s pray to get our country back,” which the cable news channels mostly talked over. He invoked the prophet Muhammad, and said “the values reflected by our leader must reflect the values of our forefathers.” There were some cheers, and some boos too. “God bless America, God bless you, God bless Donald Trump,” he said.
Tarar is a Muslim, and he’s a Muslim for Trump. He might seem an unusual choice for a convention speaker, even after prime time, for a presidential candidate who has called for a ban on Muslims. But Tarar considers himself “part of the angry Americans against the traditional politicians, and non-functioning, non-working Washington D.C.” Trump, he said, is “a doer.” He’ll go strong against extremists such as the Islamic State.

Mustansar Hussain Tarar was born in