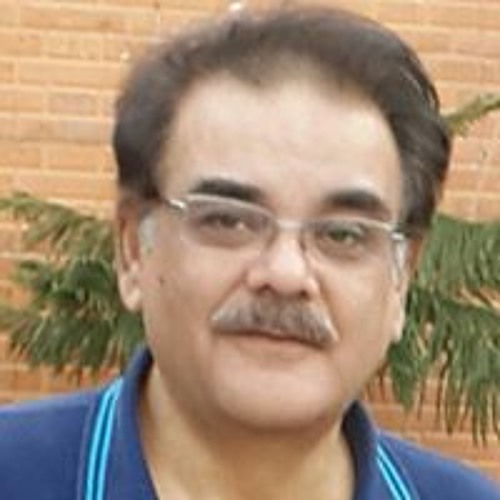 Shahnawaz Zaidi is one of the talented and well-known artists of Pakistan. He was born on 24th May 1948. His parents migrated from India, Muzafarnagar, and Uttar Pradesh to Mandibahaudin near Gujarat, Pakistan. Zaidi was the fifth of eleven siblings. Till class five he was not allowed to go to school but studied from a tutor at home, after that he was sent to a corporation school from where he did his matriculation. In 1962 his family shifted to Lahore, here he got admission in pre-medical in Islamia College. In 1964 he joined Punjab University and in 1968 he completed his masters in Designing. In September 1969 he participated in a graduating student’s exhibition of graphic design at Punjab University and in the same year he began as a lecturer there.

In 1971, he married one his class mates, who was a painter. After completing his masters Shahnawaz was appointed to Punjab University where he taught for five years then in 1974, he was appointed as Lecturer in Nairobi, Kenya. After one year he got promoted and became head of the department. He spent eight years in Kenya but then decided to come back to Pakistan, in 1982. Here he opened an advertising agency and worked there for two years. Since 1984 he has been an associate professor and later principal of Department of Fine Arts and remained at this institution until his retirement May 2008, he became the principal three times, first in March 1990 and remained for nine years till 1999, then for the second time in the same year October 1999 till 2002 and then after two years in February 2004 till May 2008. Now he is working as an adviser in Comsats Institute, Lahore. He was awarded “Tamgha-e-Imtiaz” in 1998.

Zaidi has been interested in painting and drawing since childhood. His eldest sister Arjumand Shaheen was also interested in art and she was a fine arts student at Lahore College for Women (University). Zaidi use to copy her drawings. During his matriculation period he was punished for making a drawing on this mathematics copy, which was the first “recognition” he received for his art. When he enrolled in graduate school he was very much interested in painting, but at that time Anna Molka Ahmed was the head of the art department at Punjab University and she refused to give him admission in painting, instead she offered him admission in design which he took despite of his real interest in painting. There was a competition of designing that Zaidi participated in and won first prize; soon after this he became interested in designing.

In 1984 when Zaidi joined Punjab University as a senior lecturer he started painting professionally. Before this he uses to paint occasionally. He was highly inspired by Anna Molka as she was among the first painters of Pakistan who painted in every genre. Zaidi did paintings of imaginary personalities, but he was mostly interested in portraits. His earliest achievements were the portraits of Ibn-e-Sina and many other portraits of historical personalities like Umar Khayam, Al- Razi, Al-Ghazzali and Quaid-e-Azam. All these are now displayed in Aiwan-e-Iqbal, Lahore on the second and third floors. All these portraits are in Flemish style with dark background and dramatic light which emphasize on the character. Those parts that are away from the face are painted with less detail. Thick over thin paint is applied with bold, curved and confined brush strokes.

Like the Italian Renaissance painters, Zaidi worked in all fields of art. His different works show different moods and influences. When he paints female figures he seems to be inspired by the French Impressionists. He also painted cultural scenes that can be called group portraits. Zaidi had worked in many mediums like water colors, pastels and oil. He also did some watercolors and Chinese brush technique and subjects. Zaidi participated in thirty-five national and regional exhibitions in Pakistan and abroad and one solo show in 1996/7, of portraits in Al-Hamra. He did commissioned portraits one of which is of Dr. Junaid Vice Chancellor of Comsats institute where Zaidi is now an advisor.

As Zaidi was inspired by Anna Molka Ahmed, his work somehow relates to her in terms of theme and technique. Both of these artists liked to paint social themes. Anna Molka used palette knife as her medium and Zaidi also used this medium not as a whole but he used it in some parts of his paintings and he also has done some portraits completely with palette knife. He was more inspired with Anna Molka because during those times when art just started flourishing she was the only lady who worked in every genre, with such a bold medium and in bright colors.

In addition to his painting Zaidi was very much interested in poetry. He translated the poems of Abinranath Tagor, which was rewarded a Noble Prize. He wrote a few books of poetry for example “Aiana Dar” and “Gita bijli”. Aiana Dar presents a variety of themes where colors of nature, truth of human relations and reality of the modern world seemed mingling up in various forms. Thus not only his paintings but his poetry also revolves around the social issues in our everyday life.

According to Zaidi “He is a painter basically and art teaching is his profession. Music and poetry are his affections.”