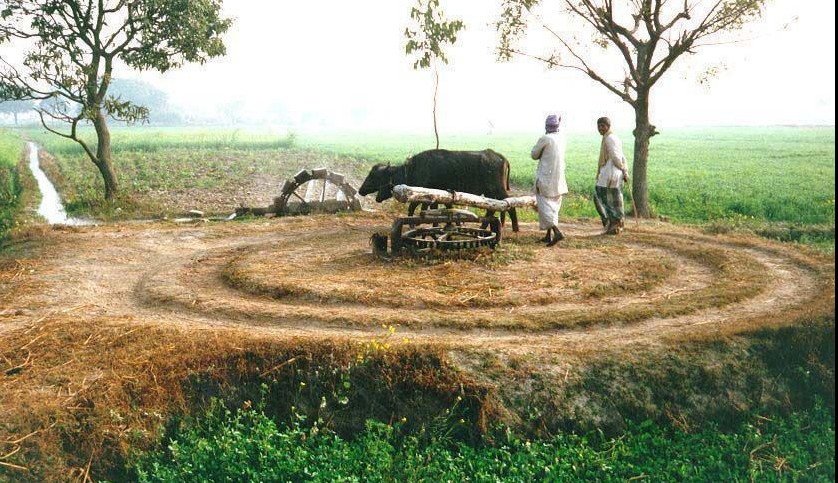 Bherowal is said to be after the name of Bhero Singh a Sikh who first of all came here to live.It is important to say that location of Bherowal is not original. It was situated where now a days its Western Graveyard is located. Where there is now a days  “Janaz e Gah” (Place for Janaza Prayer) there was mosque. Some where in binning of 18th century it was burnt by the Ranjhas of Tehsil Phalia because residents of Bherowal refused to give tax to them.     After 1857 when Enlish forces took the control of South Asia they announced that Bherowal is a village of “CHURMAIL” which mean no single owner of the village, it is owned by all the residents.

“Dharam Saal”the place of Hindus to worship their gods was situated where now a days Masjid e Muhajreen is located in the main bazaar of Bherowal.“Siwas” it was the place where Hindus used to burn their dead bodies. It was situated where now a day poultry form of Mian Zafar is located. It was built at very high place. Also it was made with special bricks but unfortunately it was ruined by the muuslims in 1947 after the departure of Hindus and Sikhs.Some buildings of that time can be seen still in north western part of the town. A small well which was built in Dharam Saal is still in its same shape but it is covered with concrete and a shop is built over it.Situation In 194715th and 16th august will ever be remembered as BLACK DAY in the history of Bherowal because of horrible killing at random of Sikh and Hindus. It is important to note here that the killings of muslims in India in 1947 had no link with this. This was happened due to the old enmity of villagers.       It is said that Manak Bosal was almost ruler all over the Tehsil Phalia during the Englsh times who never like the behavior of Sikh because they never allow him to rule over them. They all were united and Manak Bosal had no chance to took them under pressure. Hence in 1947 Manak Boal got a chance to take the revenge and under his guidance Hindus and Sikhs were killed cool heartedly even children and females were not spared.On 15th of august Bherowal was surrounded by the muslims under the guidance of Manak Bosal but no one dared to enter in the village because Sikhs took the rifles in their hands and stood over the roofs of houses. On 16th of august two brother s Named Karmalli and Mutalli Machi were called from Raan a village in the west of Bherowal they were best hunters of the area. They were provided rifles and entered in the village. They got their positions from the back side of the Sikhs in the from the east. In a few seconds they target killed the all Sikhs standing on the roofs. This was the moment for the muslims to enter the village. They had no regards for man, woman. Child, or old they martyred every one of them. Bazars and streets become flooded with blood of innocent people. Some of the Sikhs entered in the mosque and become muslims but they were not forgiven. Two km in east Chinab River was to flood they all were put into the flooded river. But after a few seconds the level of water become very low. Now no body knows about the Sikhs who were put in the river. Some people say that they were saved by the Allah because they took shelter in His House.         Tarar, Baryar, And Ditta Ke bharwane were mostly ahead in killings of Sikhs and Hindus. Harals, Sandrana and Kamme Ke Bherwne were against this horrible killing they provided shelter to a lot of Sikhs in their houses and after the blood shed they sent them to India safely.Providing of shelter to Sikhs also becomes a cause of enmity between Manak Bosal and Kamme Ke Bherwana.

There four “Bazars” (Markets) in center of the village. They divide the whole village in four parts. There is one vegetable market (Sabzi Mandi) which held on Lari Adda (Bus Stop). There are two ponds in the village one is in west while 2nd in east. They help to save sewerage water.

According to an estimate population of Bherowal is crossing 12 thousands limit.

Almost 90% of the population is attached with agriculture sector. Rest 10% work in Transport, Trade, and working in factories. Govt employees are very few.

There are two Bhathas (Bricks Factories) in the village. They provide livelihood to almost 1200 peole. One Bhatta is located on main road which is owned by Mohammad Bakhsh s/o Ali Mohammad Haral and 2nd is owned by Akbar Khan Pathan.A few year back there two ice factories as well but they were closed due to short fundings.

Thre are seven big mosques in the village if we include all other mosques this figure goes up to 14. there three madrassas as well in the village.

There is one govt high school and one govt primery shool for boys while for girls there is only one govt middle school.But there are four private schools in the village these are1] Pilot Public High School2] Millat e Islamia High School3] Pakistan Cadet High School4] Sir Syed Middle Schoolin private schools education is given to girls and boys together.

There is one govt hospital in the west of Bherowal.