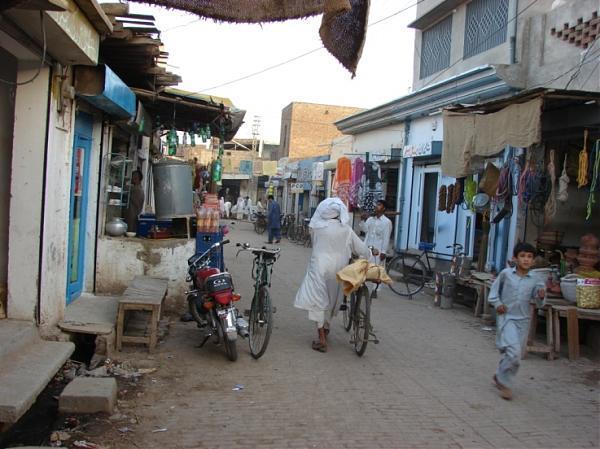 Welcome to Busal, the Gemstone of Distt. M.B. Din

Busal [also written as Bosaal :ﻝﺎﺴﻭﺑ]is one of the most prominent and populous villages in Mandi Baha-ud-din district. Exquisite mosques constructed with religious fervor, modern style and traditionally built homes, tumultuous and not well maintained road network, an excellent but not well kept network of canals & irrigation channels and lush green farming lands are most prominent features of this enormous village.

Busal is located 4.5 km off Gujrat-Sargodha road, south of Gojra, and is nearly 29 km from Mandi Baha-ud-din city. Malikwal, the Tehsil headquarter is 25 km north of Bosal. Geographically its location is 32°22’10”N and 73°18’6”E. Basically Bosal consists of seven randomly located settlements namely Sukkha [ﺎﻬﻛﺳ], Masoor [ﺭﻮﺻﻣ], Nuryana [ﻪﻧﺎﻳﺮﻧ], Jand [ﮉﻧﺠ], Nakkaywala [ﻻﺍﻭ ﮯﮑﻨ], Chhanni Hashim [ﻡﺷﺎﻫﻰﻧﻬﭼ] and Ghumnana [ﻪﻧﺎﻧﻣﮭﮔ]. Sukkha & Masoor, centrally located most populous twin settlements, are fulcrum of all cultural, financial, educational and political activities for not only the people of Busal but also for a number of small neighboring villages. Bosal is surrounded by Gojra in the north, Bhojowal and Nain Ranjha in the east, Rerka Bala and Chak-44 in the south and Bar Musa in the west.

It is not exactly known as when the first settlements of Busal came into existence but the elders of the village tell that name of the founder was BUSAL who lived here during the reign of Mughal Emperor Jalal-ud-Din Muhammad Akbarand had relations with the Emperor. The Emperor had bestowed him a large estate called Sooba Busal. Mr. Busal had three sons named Sukkha, Masoor & Noor and three main settlements are named behind them.

Irrigation department rest house also known as bunglow was built outside busal in 1915 and a police chowki was established in Busal in 1935. Canal and irrigation channels system was built between 1910 and 1944.

Patwar Khana is one of the oldest buildings and among very few pre-partition buildings left.

Busal has a huge population growing at immensely high rate. Due to construction of roads, availability of telephone service and establishment of new schools, the people from small neighboring villages have also migrated to Busal. The number of registered voters in Busal is just below 16,000. This indicates that total population is well above 35,000.

More than 99 % of the people of Busal belong to Aryan race with a small minority of Dravidians. The Aryan people are dominant in almost all spheres of life while Dravidians who were in lower castes during the epoch of Hindu dominance are still living mostly below poverty line and are devoid of education and other amenities of life.

It is not exactly known as to when Islam came to this region but majority of the people practiced Islam since long before the partition of British India in 1947.

Significant population of Hindus [Called Khatris] also lived in Busal before the partition that migrated to India in 1947. They were mostly traders and dominated entire business and economy of the area. After partition, they were replaced by Muslims mostly belonging to Rajpoot dynasty, also Aryans, who migrated from Karnal district of East Punjab [now a district in Haryana, India]. Local people called them Mahajir, a word closely meaning the emigrants. These people have adopted a variety of professions from farming to business and have now become an integral part of the local population.

The people of Aryan race are also further divided into landowner and worker class. Although very few families among the landowner class of Busal own large lands, nonetheless this class is considered to be the most respected because the economy largely depends on agriculture. The worker class forms the people belonging to other professions.

A small minority of Pathans, mostly emigrants from Afghanistan after Soviet invasion has also settled in and around Busal.

A small community of traditionally nomadic people also settled in suburban areas of Busal are called Deendars [The Faithful] because they have also converted to Islam.

The class system and hegemony of landowners is slowly getting weaker with increase in literacy rate better awareness about human rights.

Nature of the People of Busal:

Busal has been notorious in the past as the village of thieves and land of great rivalries mainly due to lack of education. Strong grip of feudal lords, who were against education and awareness, was the chief factor behind ignorance.  Establishment of Government Middle School Busal was the first step towards change to a civilized and educated society and over a period of few decades, the change was visible. Now nurturing rivalries and committing crimes is no more a matter of pride.

Now people are more civilized, educated, hospitable and aware of their own and other peoples’ rights.

The low caste people in Hinduism [Dravidians], after conversion to Islam are called Musalli [ﻰﻠﺼﻣ];Muslim Sheikh is a euphemism for Musalli. People belonging tothis community mostly work like slaves under landowners (doing all sorts of miserable jobs) or at brick kilns, making their living by casting raw bricks from mud. Majority of them are buried under the heavy burden of immense debts due to land & kiln-owners and there seems no end to this vicious & destitute lifestyle worsened by debts for many generations still to come. However few members of this community being literate are being well aware of their human rights are leading a better life.

Almost the entire population of Busal is Muslim out of which 10 ~12 % people are Shia Muslims while others are Sunnis. Religious devotion and practice varies from family to family, however religion plays very important role the lives of people.

Punjabi [with a little rough accent] is the language predominantly spoken by the people of Busal. Rajpoot community speaks their native language Rahngri [ﻯﮍﮔﻧﻫﺍﺮ], a language closely resembling of Hindi / Urdu with little distortion in accent. Urdu is also spoken and understood by a large majority.

Economy largely depends on agriculture and more than fifty percent of the people of Busal are related to agriculture. Busal has one of the most fertile lands in Pakistan and farmers are well-off due to excellent production of cash crops like sugarcane, orange, paddy, cotton and wheat.

Many people have joined government and private services and a large number of young people are living and working abroad in Gulf States, USA, Australia and Europe.

Although the literacy rate of Busal is very low by international standards, it is one of the highest in Mandi Baha-ud-din district. The literacy rate also varies from family to family. Some people of Busal hold doctorate degrees and hold global fame while a large majority has never even visited a school.  The literacy rate among females is even low.

Government Higher Secondary School Busal has made great contributions in spreading the light of knowledge among Busalians. It is one the best and most respected institutes of preliminary education in the entire tehsil Malikwal. Over the years, it has produced many brilliant students who after receiving higher education are working at respectable positions not only in Pakistan but in many foreign countries as well.

The School was established in 1905 offering education up to primary level only. In 1951, with the efforts of social workers like Hakeem Ghulam Ali (late), the school was promoted to middle level. Ch. Batti Khan Busal (May Allah bless his Soul), a venerated landowner, donated approximately 33 kanals of land for the project. In 1984, this school was upgraded to high school and two years later (in 1986) to intermediate level. The school has produced good results in the past and a number of boys won scholarships every year. In addition to this, sports and co-curricular activities were also promoted at school and school always produced good sportsmen and athletes. This was due to the sincere efforts, dedication and hard work of teachers /administrators like

Presently around 700 students are enrolled in the school but shortage of teaching staff and lack of co-curricular activities have diluted the education standard of school.

Due to commercialization of education and lack of attention of the people of village and shortage of teaching staff, the standard and performance of the school have suffered badly in past few years and immediate remedial action is required to regain the standard of this institute which can undisputedly be termed as Symbol of Pride for Busal.

A number of Madressas are also working in the village to impart religious education free of cost to the children of all classes of society.

Presently there are almost no proper medical facilities in Busal. Although few students of Busal have become qualified doctors but they are presently not doing practice in Busal due to which people have to go to Gojra or Mandi Baha-ud-din for medical treatment.

A basic health centre manned with a medical technician and compounder had been set-up by Punjab Govt in Busal beside higher secondary school. However it stopped functioning since early 1990s due to unknown reasons. Due to efforts of the social workers of the village, govt has initiated the project of its reconstruction and it is hoped that a doctor will be appointed here in near future.

Despite of the fact that Busal is a large village, there is no recreational spot or playground for children in or around it. Children usually use School ground and graveyard for playing cricket.

A small canal passes from east of the village and a bit larger from west side. There used to be a time when people especially young boys used to do swimming in these canals but now thanks to the population of villages located upstream of Busal, these canals are highly polluted and sport of swimming has also disappeared.

A rest house of irrigation department is also located approximately 2 km from Busal Masoor and Sukha. Once it used to be well maintained and a number of varieties of flowers and trees rendered it a splendid look and it also served as a large bird sanctuary. However presently it is nothing more than a depiction of great neglect.

Muhammad Akbar Rao holds a Chemical Engineering degree from University of the Punjab Lahore and is presently working with Fauji Fertilizer Company, as Process Engineer in Technology Division. After completing the preliminary education in his native village, Busal Masoor, Akbar joined PAF College Sargodha in 9th grade and studied up to FSc there.

Akbar likes travelling, reading & making friends. He has aspirations to set up international standard schools [for both boys & girls] in his village for quality education to all at primary and intermediate level. His long term goal is to eradicate illiteracy from Busal.