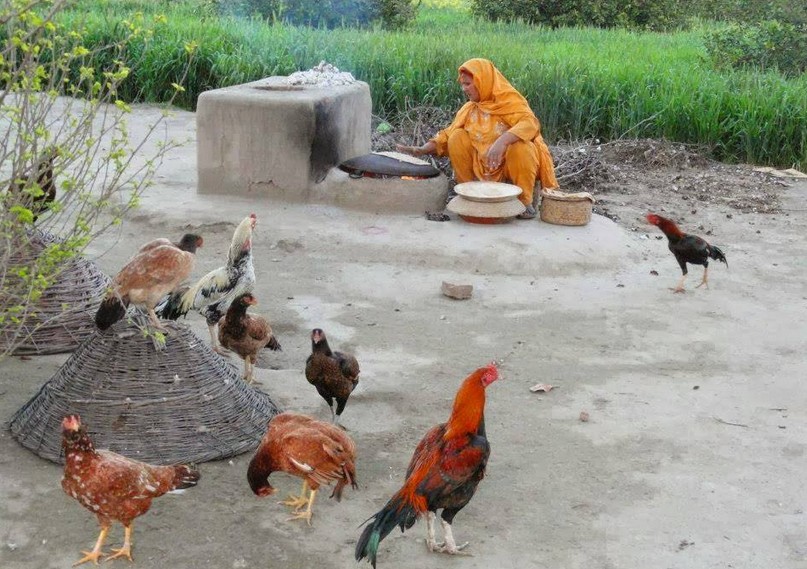 Pakistan is an agriculture based country and most of the population lives in the rural areas. People living in the villages have their own way of  life which is quite different from the city dwellers. Their life is simple, they have a cleaner pollution free environment and they eat simple, healthy and pure diet. In this segment, the real life in villages is shown through photos (Pics) . The life in rural areas and Pakistani villages is worth seeing.

A Woman Making Chappati (Roti/Phulka) in the Open

An Indoor Kitchen in a Pakistani Village House.

A Village House and a huge Tree

Beautiful View of a Village in Punjab

A Village House in Punjab

A Small Canal and a Bridge

A Beautiful Scene of a Village in Punjab

A Gali (Street) in a Pushtoon Village in Sanjavi, Baluchistan. Sanjavi, surrounded by the beautiful landscape of barren mountains lies on the Loralai – Ziarat Road. Photo by y uMa|r.

Harvesting Wheat Crop in a Village. Villagers and their women folk are busy in harvesting the bumper wheat crop. They will try to immediately store or sell the wheat lest the untimely rain destroy the yield.

A Villager Thrashing Wheat Stalks on a Drum . Obviously the poor farmer can not afford to hire a thrasher.

Wheat Crop with Mountains in the Background in a Village in Mianwali, Punjab

Gur (Raw Sugar) Being Made from the Sugarcane Juice

A Villager on a Bicycle in Sunflower Fields

A Sunflower Field and a Donkey Cart on a Dirt Road

A Village Farmer in the Lush Green Vegetable Fields

Wheat Crop: A farmer working in the wheat fields.

A Farmer is Harvesting Strawberries

A Peasant With His Rich Harvest of Brinjals (Eggplant)

Women Working in the Fields

A Village House during Rain.

A Village House in Kohat, Khyber Pakhtunkhwa Province. Animals are eating fodder in the compound and clothes are strung on the washing line.

A Village in Punjab. Every farmer has enough live stock to cater for his family’s need and also sell the surplus milk to earn some money.

Cattle (Live Stock) in a Typical Village in Punjab

Buffaloes in a Village

A Farmer Having Lunch in the Fields

An Old Man Smoking Huqqa near his Live Stock

A Villager is Smoking Huqqa While Riding on a Bicycle

Shepherds with Their Herd of Sheep

A Village Milkman with his Milk Pots and Bicycle

A Traditional Bricks Kiln-October 2010.  Along New Bypass Mangla. Photo by A. Ahmed Khan.

A Mud House in a Village. He owns a car too, Masha Allah.

Another Village in Punjab

A Villager Cutting Fodder in a Toka Machine for the Animals

A Well in a Village. A traditional well being run by an ox with  covered eyes.

Another Well in a Village

Two Villagers at a Well

A Village Mosque. A small village mosque and over head clouds.

A Tractor in the Fields

A Tractor With Sun in the Background

A Tractor Carrying Fresh Fodder in a Village in Punjab

A Village School in Khyber Pakhtunkhwa

A Little Boy Playing ‘Gulli Danda’ in a Village. A game which doesn’t cost a penny.

A Village ‘Swimming Pool’. They don’t need any swimming costume. They just jump into the water with their clothes on to beat the heat.

Another “Swimming Pool” in a Village. Here thety are neither pushed about swimming gear nor any clothes. The kid seems to be an expert diver.

A Village in Sindh Surrounded by Flood Water

Cleaning Day by a Milkman in a Village. Who says that milkmen don’t clean their pots? This guy has thoroughly cleaned the utensils and hanged them for drying in the sun.

Dish Washing in the Village House. Even pots for use in the house are cleaned properly and dried.

Old Photo of a Well in a Village in Sindh, 1924. Photo by Abaraphobia.

A Date Orchard and Houses in a village in Sindh, 1890