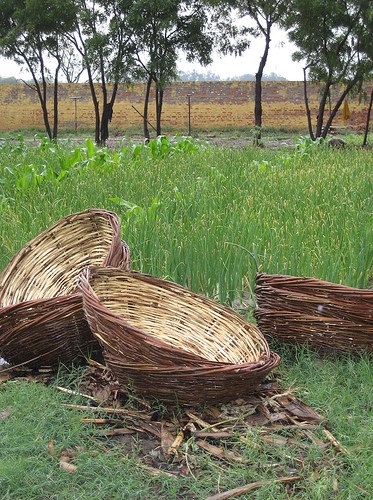 The tradition of Punjabi basket weaving.There was a time when Punjabi villages were completely self-dependent. Crucial items of daily use– like tokri (baskets) and gohle (pots) were widely manufactured locally. The baskets in particular were made out of the wood of Mulberry trees (shahtoot), which were a staple part of the landscape of pre-modern Punjab. These trees, crucial to a number of traditional crafts, were quite common alongside wells and fields but you would be lucky to come across them in rural Punjab today.Mulberry trees used to be associated with a number of other uses as well. Owing to the density of its canopy, it was popular among the travelers for a rest under unrelenting summer heat. The wood of these trees was also used for various traditional games – the flexible timber being ideal for little boys to fashion rural bows and arrows. These trees have also entered the common culture, being associated with a number of folk songs as well, the most popular of them being Malkiat Singh’s ‘Tutak tutak tutiaan’.

The baskets or tokre made from mulberry trees’ wood were used for a number of purposes. Women used to carry the food for their husbands in the fields. These were also used for feeding the buffaloes and cows and, upturned, for providing warmth to hens and chickens at night. The waste of domesticated animals was disposed off using these baskets and this practice resulted in development of a number of teasing folk songs over time.Sickles were used to cut mulberry wood into sticks and these sticks were woven by experienced craftsmen. Heavier sticks were used to weave bigger baskets – ‘tokra’ and slender ones were used for weaving smaller baskets – ‘tokri’. The diameter of a bigger basket (tokra) used to be around 3 ft and the smaller basket (tokri) used to be around half a foot smaller than that.The practice of weaving and using these baskets (tokri and tokra) is, sadly, dying a slow death. Most of the new age villagers prefer solid baskets made of plastics and the household trade of weaving these baskets is rapidly on the decline. These are hardly to be seen in the modern Punjab and the urban kids are becoming oblivious to their rich cultural past quite rapidly.