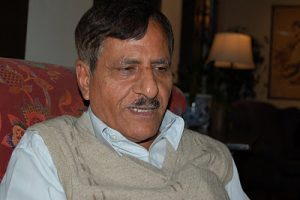 Ahmad Salim or Muhammad Salim Khawaja (born 26 January 1945 in Miana Gondal, District Mandi Bahauddin, Punjab, Pakistan) is a writer, archivist and co-founder of the South Asian Resource and Research Centre, a private archive established in 2001. He currently lives in Islamabad.

Born Muhammad Salim Khawaja in the village of Miana Gondal in Mandi Bahauddin District, Punjab, Pakistan, Salim was the fourth among seven brothers and sisters. Salim’s early education was in Miana Gondal, before going to Peshawar for matriculation. While studying in Peshawar, Salim made acquaintance with writers and poets; notably Farigh Bukhari, Mohsin Ahsan, Raza Hamdani, and Jauhar Meer.

After matriculating from Peshawar, Salim moved to Karachi for his intermediate education. He got admission in Urdu College. Around that time Ahmad Salim participated in a competition arranged by Afkar, a literary magazine. Participants were asked to write their thoughts on Faiz Ahmad Faiz’s poetry. Ahmad Salim’s poem on Faiz got first prize in the competition. At that time Faiz was the principal of Abdullah Haroon College. On Faiz’s invitation Ahmad Salim joined Abdullah Haroon College. A close association grew between Faiz and Ahmad Salim, and continued till Faiz’s death in 1984.

After completing high school (Intermediate) Ahmad Salim joined the National Bank in 1968. Later he was transferred to Rawalpindi where he continued working for that bank through 1969. Ahmad Salim then moved to Lahore and started teaching at Shah Hussain College. During 1969–71 he was associated with National Awami Party (NAP), and was briefly put in jail in 1971 for his criticism of Pakistan Army’s operation in East Pakistan (now Bangladesh).

After Bhutto imposed martial law, Ahmad Salim moved to Karachi in late 1977. There he wrote reviews of TV programs for Daily Aman (Editor: Afzal Siddiqui). For supplemental income Ahmad Salim did a lot of translation work too, and came to popularly known as Ahmad Salim Muttarajjim (translator). In 1979 he got admission in MA Philosophy at Karachi University. He completed MA with a gold medal. It was around that time that Ahmad Salim got married. Starting from 1981 he edited JafaKash, a labour magazine. 1985–88, Ahmad Salim taught a course on Pakistani languages at Karachi University — the same course that he had taught at Sindh University. After separating from his wife in 1988 Ahmad Salim moved to Lahore. He has one daughter from that marriage.

When Pakistan’s National and Provincial assemblies were dissolved by President Ghulam Ishaque Khan in 1990, Jang group asked Ahmad Salim to write a book on Pakistan’s history related to dissolution of assemblies. Ahmad Salim quickly learned the scarcity of research material and the difficulty in obtaining information from government institutes. He started collecting and archiving material of historical importance. Thus became his career in archiving.

1996– June 2007, Ahmad Salim worked as the Director of Urdu Publications for Sustainable Development Policy Institute, an NGO. He still does part-time research work for that organization. In 2010 he received Islamic Republic of Pakistan’s Pride of Performance Award in recognition of his contribution in the field of literature.