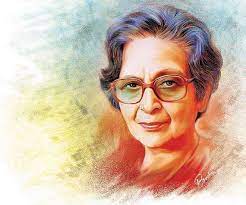 The famous Indian novelist, essayist and poet, who wrote in Punjabi and Hindi, is considered the first prominent female Punjabi poet, novelist, essayist and the leading 20th century poet of the Punjabi language. She was born as Amrit Kaur in 1919 in Mandi Bahauddin. She is equally loved on both sides of the India-Pakistan border. With a career spanning over six decades, she produced over 100 books of poetry, fiction, biographies, essays, a collection of Punjabi folk songs, and an autobiography that were all translated into several Indian and foreign languages.

Amrita Pritam; (31 August 1919 – 31 October 2005) was an Indian novelist, essayist and poet, who wrote in Punjabi and Hindi. An prominent figure in Punjabi literature, she is the recipient of the 1956 Sahitya Akademi Award. Her body of work comprised over 100 books of poetry, fiction, biographies, essays, a collection of Punjabi folk songs and an autobiography that were all translated into several Indian and foreign languages.

Pritam is best remembered for her poignant poem, Ajj aakhaan Waris Shah nu (Today I invoke Waris Shah – “Ode to Waris Shah”), an elegy to the 18th-century Punjabi poet, an expression of her anguish over massacres during the partition of India. As a novelist, her most noted work was Pinjar (“The Skeleton”, 1950), in which she created her memorable character, Puro, an epitome of violence against women, loss of humanity and ultimate surrender to existential fate; the novel was made into an award-winning film, Pinjar (2003).

When India was partitioned into the independent states of India and Pakistan in 1947, she migrated from Lahore, to India, though she remained equally popular in Pakistan throughout her life, as compared to her contemporaries like Mohan Singh and Shiv Kumar Batalvi.

Pritam’s magnum opus, a long poem, Sunehade won her the 1956 Sahitya Akademi Award, making her the first and the only woman to have been given the award for a work in Punjabi. She later received the Bharatiya Jnanpith, one of India’s highest literary awards, in 1982 for Kagaz Te Canvas (“The Paper and the Canvas”). The Padma Shri came her way in 1969 and finally, Padma Vibhushan, India’s second highest civilian award, in 2004, and in the same year she was honoured with India’s highest literary award, given by the Sahitya Akademi (India’s Academy of Letters), the Sahitya Akademi Fellowship given to the “immortals of literature” for lifetime achievement. she wrote her poems mostly for the partition.

Amrita Pritam was born as Amrit Kaur in 1919 in Mandi Bahauddin, Punjab, in present-day Pakistan, the only child of Raj Bibi, who was a school teacher and Kartar Singh Hitkari, who was a poet, a scholar of the Braj Bhasha language, and the editor of a literary journal. Besides this, he was a pracharak – a preacher of the Sikh faith.

Amrita’s mother died when she was eleven. Soon after, she and her father moved to Lahore, where she lived till her migration to India in 1947. Confronting adult responsibilities and besieged by loneliness following her mother’s death, she began to write at an early age. Her first anthology of poems, Amrit Lehran (“Immortal Waves”) was published in 1936, at age sixteen, the year she married Pritam Singh, an editor to whom she was engaged in early childhood, and changed her name from Amrit Kaur to Amrita Pritam. Half a dozen collections of poems were to follow between 1936 and 1943.