[Note: The history and the facts are not still final. The confirmation is still in process. It would be appreciated if some one can contribute more. The further additions are heartily welcome. We are still working on it. Umar Farooq]

A meeting was arranged with Mr. Anwer Mughal son of Nazeer Khan. He is resident of Qadirabad. He is famous because of his knowledge about the history of Qadirabad. He did his schooling up to 8th class (1929-1937). There were not so much people educated up to that class in Qadirabad that time. During that time there was not so much trend of education and schools & colleges were also not available like today. He was requested to inform about the history of Qadirabad.

A very old building or tomb called MUKBRA (Shrine) as shown in the pictures is since the time of Mughal. There was a great hunger at that time called QAIHATT. The purpose of the building was to supply food during that time.

There is also a police station in Qadirabad since the time of British [1862]. The British also planned water canals in this area.

The Refugees settled in Qadirabad after partition (1947)

The Refugees or Muhajirs in Qadirabad came from various parts of India (e.g, Ambala, Karnal, Khod and Hoshiarpur etc). Mostly belong to Arain and Gujar families. They speak different languages but they can understand each other. The children of Muhajirs are speaking Punjabi language perfectly which is local language of the Punjab Province and is difficult to guess to which family they belong. Before the partition there were living Hindu families in Qadirabad together with Muslims. Hinduâ€™s were doing business. Their main business was about furniture, crops and ghee (a milk product). They were sending their product to far away to many districts of Pakistan and India. The relations of Hinduâ€™s and Muslims were very well that time. They were participating in each other different cultural events and celebrations like marriage etc. Qadirabad was very famous because of wood furniture. It was easy to transport the wood because of river Chenab. Before the partition there was lot of old tree near Qadirabad. There was forest called Jungel along the river Chenab. It is still present but there are not so much trees. The old trees are not at all available. Old trees are considered to be the best for the furniture. Before few years ago there was also a plant disease in this region. Mostly plants are dead. The greenery is dramatically reduced. It was not only in Qadirabad but was also in other districts of Punjab. Which is in reality alarming situation because a natural environment is absolutely necessary for the human survival. Before the partition there were many gardens around Qadirabad but now it is difficult to find any garden near Qadirabad. 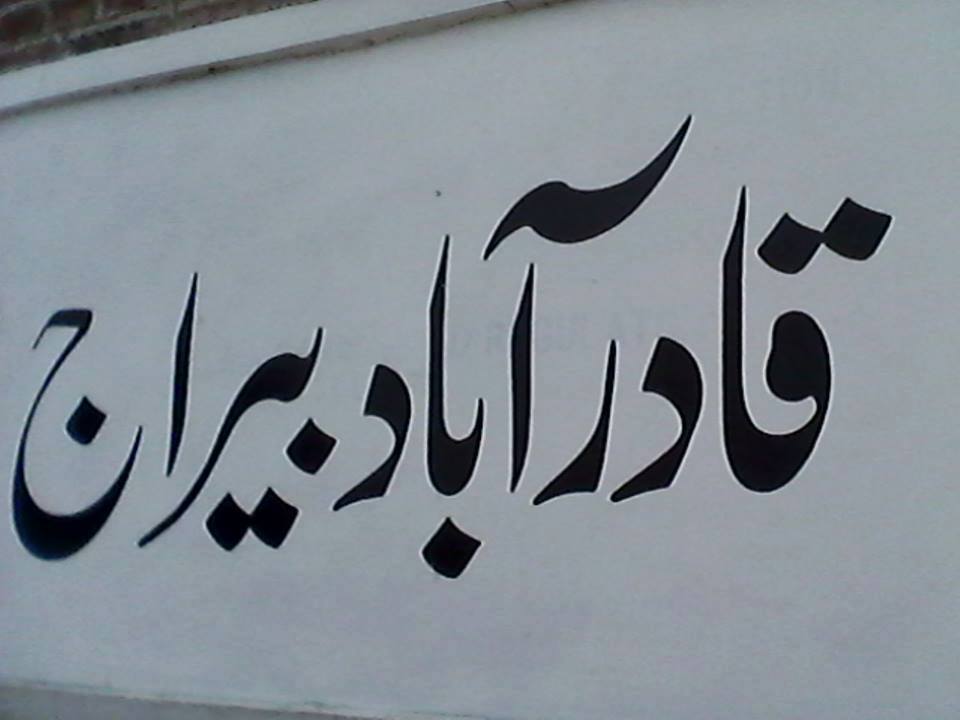 But in general, people of the village are hospitable, love their town and country. The source of income is: agriculture->50%, business->30% remaining->do jobs in government and private sectors.

There is no special industry in this area at the time. The mostly people depend upon agriculture. Some do business on shops level and the rest have employments. The main crops are rice, sugar cane and wheat. The region is also good for the different types of vegetables and fruits like mango and orange. The land is also good for potato and tobacco production. Many people have animals especially buffalos and cows. The land is also very fertile for the production of crops for different kinds of animals. The mostly people are the owner of the land less than 8 acres. A few families have the land up to 50 acres but it is difficult to find someone who has the land more than 100 acres.

Culture of the Village

It has mixed culture. At this time it is going to change like city. People perception about study is becoming healthy.

River Chenab, Koray Karam Shah, Tariq Abad, Jago Kalan, Kala Shadian, Bheko more. These are all near about 2 to 4 kilometers from Qadirabad.

Schools, Collages, Mosques and Madrasas in the village

Govt schools for girls and boys and colleges for boys and girls at intermediate level. There are about 4 private schools workig in the town. Ghazali school, Kamran Model School, Mustufai school etc.

Hospitals, Medical stores and shops in the village

One Govt. rural health center. There are near about 10 to 20 private medical stores. Working under the supervision of there dispeners

There are internet cafes in the city and T.V. cable media is also available

There are few motels for bus and truck drivers

The jungle at the bank of river chenab and river chenab chenab itself is thye source of joy for people. Many people used to go there specially on cultural and religious events.

He is from one of the earliest graduates of Qadirabad. Doing job in Canada from almost ten years. People of his community are also proud on him.

May Allah Bless This Village [AAMEEN]