Village is divided in to two parts: One is the main village situated at M.B.Din to Malakwal road and other part is Sahi More.

Wara Chamian is present between Majhi, Noor Pur Piran, Lower Jehlum canal on South side of the village and Jehlum River on North. Majhi is located towards the East, Noor Pur lies towards the West of Wara Chamian

Total area of the village is about 48 squares that is about 1200 acres in which no one in the village contain more than 40 acres so no one is a big fish but it is almost equally distributed among prominent families.

Village Wara chamian has very old History since Raja Ranjeet Singh Government in Punjab. In 1130 A.D Char Gujjar Tribes were resident of old Wara, called Wara Gujran. With the passage of time some of them were died while remaining travelled back to their native village Charanwala present in District Gujrat. So there land was captured by SAHNA who was a landlord of the area. After some time in 1470A.D Sahna distributed all his property in his sons known as Khanana, Chhimon, Majhi and Hassan. A branch from Majhi tribes called Chami, A person known as SAIDA Chami always quarreled with other his tribe personals. So Mr. Qutab with his brother FATEH DIN and Nephews JHANDA, MEHR and GHOR opted self migration towards their Western Land called AHLI GUJRAN (AHLI means Graveyard of Gujjar Tribes) and they captured a major part of land form SAIDA. In this way major caste Chami became first resident of wara Chamian. As the old people called WARA to the YARD surrounded by wood for cattle and the caste of those people was Chami so, this village was known as WARA CHAMIAN. At that time mostly robbers came and robbed and murderd people, they felt unsafe themself and called for help to their older brother Grand father of BHOCHARS from Manchar, Chathian and MR Mishry Khan SAHI from MALOWAL village, a part of current Dhok Kasib. Mr FATEH DIN, the founder of the village married his daughter with Mishry Khan SAHI. In this way Sahi were second resident of the village. Kashim Khan ,a son of Mishry Khan was married in Khanna village. He had five sons MR WAZIR KHAN, PIR KHAN, AMEER, MUHAMMAD SULTAN, KHAN, and KAMEER KHAN. MR WAZIR KHAN SAHI was the first literate person of the village. He became PATWARI and was the most powerful and nice person of his age in the village. He helped all his brothers ,he bought land from different villages and empowered all his family that is why now a days SAHI have land at second number in the village .

Another SAHI Brother known as BHELK KAY was migrated from BAGRIANWALA near DINGA in district GUJRAT. WARRAICH came  from GACHARA village  in present district Gujrat. Mr IMAM Bakhash Kashmiri was the first watchman of the village uptill now this rank is till lying in his generation.

When in 1980 A.D Main road was being completed with tarkool  Mr Nazir Ahmd Sahi was resident on this stop. All his tribe was living near to this stop for thee eras. also he was a welfare mind person  so he asked  Highways Authorities to keep the name SAHI  MORE of this point .Later on the robbers became habitant to kill people on the LOWER JEHLUM CANNAL southern  bank so he requested to police officer to send some policemen at this bank.In June1992 an incident increased importance of this check post when S.H.O Shabbir Khan Niazi was murdered with his constable on the spot by robbers. So higher authorities realized to establish a permanent check post at this point. Now this check post has been refurbished  for Patrolling Police.

Population of WARA CHAMIAN was mostly Muslims in 1947 (at the partition time of sub-continent) there were only two houses of HINDUES. These Hindus were wise persons and were literate therefore they realize the situation before 14th August 1947, soled their houses and migrated to Mandi Bahauddin where most of their relatives used to live. That’s why there was no bloodshed in the village at the time of partition. 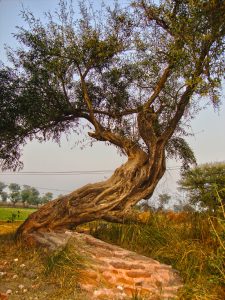 Neighboring villages of Wara Chamian are

It is nota very big village only about 350 houses are in it and about 2,000 peoples live in them. All the population of the village is Muslim among them all are Sunni. No non-muslim is there in the village.

The number of registered voters in the village is 1000 among them almost half of them are of female voters. Although village is small but at the time of election village splits into three parts. Each group tries to cast votes against each other. At the time of BD elections both males and females cast vote but at National and Provincial Assembly elections only males cast their votes.

Major castes of the village are:
Sahi

Majority of the peoples earn their livelihood through agriculture. Few peoples are in Government services and among them most are in army. Now there is trend among the youth to go abroad that’s why many peoples of the village are found in France, Spain, Greece, Itlay, Kuwait, Saudi-Arabia, Muscat etc. in search of their earning.

Peoples of the village live a simple life. They have very friendly behavior. Peoples are very much hostile, peaceful and sincere. Except few black sheeps vulgarity is an uncommon thing. People of the village go to their lands to care their cattles and crops and come back in the evening so they have a very busy life. Young boys play Cricket, Volley Ball or play cards in their extra time. Peoples of the village remains careful about fight and misbehavior because if any body do a little mistake other party persons quickly report to the police at Thana Malakwal

No Bazars or Markets are present in the village only four General stores (Karyana shops) are present which provide commodities of daily use. Peoples have to go Malakwal or M.B.Din for major shopping shopping

There are total three mosques in the village, two in the main village, one in the southern settled areas Among them two are JAMIA in the main village. The mosque along the patrolling Police Check Post was constructed by sons of Dr. Nazir Ahmad Sahi who was a well-known personality of his age.

There is no hospital in the village only one clinic is present which is run by a health related servant. Three females of the village are working as a Health Worker. They are creating awareness in females about health related problems. Now after their guidance females are very much aware of pregnancy and birth etc. Generally peoples get medicine of minor diseases from village and of major from Malakwal or M.B.Din.

Village is located almost 100 Meters towards north from Malakwal-Mandi Bahauddin Road. People of the village travel on Buses, Vans from Villages own Bus Stop. They also travel on Motor Cycles and Cycles are very common in the village which are used to go towards their land areas.

As the land of the villagers is very near to the village and it is very much close to RIVER JEHLUM therefore a lot of area is available for wild animals. Wild animals found in the villagers land are:

Problems of the Villages People

As the Village is small so basic facilities are absent  No hospital, No Markets, No college for Boys or Girls therefore peoples especially females have to face many difficulties in order to fulfill their daily or occasional necessities. Main problems of the village are as under.

The most prominent problem of the village is the removal of wastewater of homes and rain the main obstacle in this way is Lower Jehlum Canal (it cuts the village body from villagers own land) and land of other villages around this village. In the absence of sewerage system some people of the village has to face problems like accumulation of rain water in front of their houses, which is a common source of many diseases like MALARIA,CHOLERA and SCABIES etc.

As the land of village is located almost at the bank of River so second important problem of the village is Flood in the River Jehlum although this flood does not come in the village but in the lands of villagers. The most severe incident occurred in 1992 when it caused large scale destruction of crops and cattles. Unfortunately it had come suddenly at night when most of villagers were at their homes almost 1.5 Km away from their livelihood before sleep they didn’t know that in the morning they will loss all their crops and some of their cattles. Such incidents occur periodically.

People of the village are not very rich nor very poor. Except few houses all other can earn their livelihood easily those who are poor they are helped by the other village people in the form of Fitrana or other things in the name of God so fortunately every one is able to eat honorably.

This is another main problem faced by students especially by Girls as there is no institute after F.A (Inter) degree so the girls have to face great hurdle in their career so most of them stop their education because villagers does not allow their girls to go away from their homes, so most of the girls are under-inter if other want to carry on their education they do so either Privately through Punjab University or  through Allama Iqbal Open University Islamabad.

As it is already mentioned that most of the reports in Thana Malakwal belong to this village in which most are to pull legs or arms of the opposing party but the steeling of cattles is an important problem faced by villagers especially JUTT families such Thieves does not belong to this village but to nearby villages whom names are not good to mention, in this village few black sheeps in young generation are also going on wrong path.

It is certified that that there is no political or prejudicial effect on the information provided below for website uploading to you. All those words written about the history are same as told by Mr. RAJA Khan S/O Jahan Khan D.O.B 1910 A.D who is famous person in all village about history.