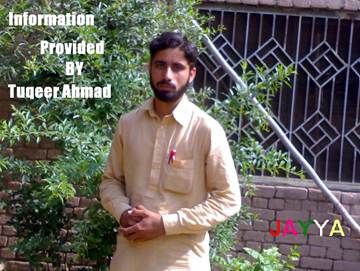 Total area of the village is about 80 squares that is about 2000  acres in which no one in the village contain more than 45 acres so no one is a big fish but it is almost equally distributed among prominent families.

Population of Jayya was Totly muslim in 1947.

The biggest/ famous faternity/party of village is known as Malik/ Khokhar.

Expect these there are two more parties are here but these are bit small against above.these two parties are Gondal and comboh.

Approximately 4 years or 4 an Half years ago few persons came from Sanica which is head related 8 or 10  km away from North side which is attached to Shahpur disstrict Sargodha and make their residence in a small sandbank place where there today is Jayya now. This area was related to Bhikhi sharif. Duration of the persons were estimated 7 mans and some womes are also along with them

SULTAN Mehmood alias Thanna has six sons. There are four sons has been mentioned above. In these sons four has its own generation but two was verjin and has not any son or daughter that is why no one knows about their name of anything else. When Mr. Thanna stationed at the Sandbank in this time there are much rush or robberies. When the persons of Chhimon came with determination to attack and rob/plunder towards bhikhi then the Baba Thanna and his sons compete them with bravery and compell them to run return to chhimon. When the people of bhikhi to know that some people came to protect them they gone to Baba thanna with whole village and said that please get our whole property but protect us and keep the theft away from us which are people of Chhimmon. In this occassion they gave the property to Thanna whish was round about 8 murrabba(square), and now Jayya is in those 8murrabba’s(square)

After passing the time the generation of  Thanna was increased upto 4 thousand persons whose they have 13 faternities.

It is a very big village its about  500 housesare in it and about 4500 peoples live in them. All the population of the village is muslim among them all are SUNNY except one house that is of SHIA. No non-muslim is there in the village.

The number of registered voters in the village is upto 2500 among them almost half of them are of female voters. Although village is small but at the time of election village splits into three parts. Each group tries to cast votes against each other. At the time of BD elections both males and females cast vote but at National and Provincial Assembly elections only males cast their votes.

Majority of the peoples earn their livelihood through agriculture. Few peoples are in Government services and among them most are in Private jobs and ARMY. Now there is trend among the youth to go abroad that’s why many peoples of the village are found in France,Spain, U.K, Itlay, Dubai, Baljiam, Saudi-Arabia, Muscat etc. in search of their earning.

Peoples of the village live a simple life. They have very friendly behavior. Peoples are very much hostile, peaceful and sincere. Except few black sheeps vulgarity is an uncommon thing. People of the village go to their lands to care their cattles and crops and come back in the evening so they have a very busy life.Young boys play Cricket,Volly Ball. Volly Ball is the Famus Game of  our Village. Peoples of the village remains careful about fight and misbehavior because if any body do a little mistake other party persons quickly report to the police at THANA KUTIALA SHEKHAAN.

There are two more Game are in my village.

There is a Famus Game that known as Horse Riding.

Horse riding is over best Game. There is club “Idiel Sherazi Club“

No Bazars or Markets are present in the village only General stores (Karyana shops) are present which provide commodities of daily use. Peoples have to go M.B.Din for major shopping and to King Road for minor shopping.

There are total four mosques in the village, two in the main village, and others two are out sides of the village.There are two Jaamia masjjads.One is “ Markazi Jaamia Masjad Hanfia Rizwia“ in east side of the village and the second is “Jaamia Masjad Farooqia Jalalia“. The Namaz e Jumma & Namaz e Eid are Held in the twise Jamia Mosques. There are many Namazi in my Sweet Village JAYYA.

There are seven shrines in the village. These are offour in village The main is BABA NOOR Peer Qureshi. In this Shrine two Bazurgs, One is Hazrat Baba Peer Sayed Noor Peer Qureshi and second is Hazrat Baba peer Feroz Shah Qureshi.
People from all over the area come here to get rid of  many diseases especially JOINT PAINS. They believe that after coming, offering Fateah, putting money in the safe  and distributing CHAAWAL & DOODH. They get rid of these problems. There held Mehfil e naat in at every Thursday and Giaarvi Shareef in the date of 11th of every Islamic Month. People go to the shrine every Mornig for resite of the Holly Quraan and go there after every Jumma for Fateha Khwaani.

Shrine(Darbar) of Baba Noor Peer Hashmi is located mid in Qabristan and the East  side of the village. In the past this money was used by the Makhdom Muhammad Bakhash  is used for the construction and well being of the shrine.
People pick stone from the Darbar and tie them with their arms to get rid of Fever especially chronic fever headech and pain.

There are many Boys who are F.A Pass and many survairs of my village those are abroad for job seeking. And many boys & girls are Matric pass.

And Many Boys are Canstables.

Note:Many persons are in Army and Rangers and at difirent posts of Govt.

There are two Advocates in my Sweet Village and one JUDGE.

There is no hospital in the village only one clinic is present which is run by a health related servant. One female of the village is working as a Health Worker. She is creating awareness in females about health related problems.Now after her guidance females are very much aware of pregnancy and birth etc.Generaly peoples get medicine of minor diseases from King Road and of major from M.B.Din.

Village is located almost 2 KM towards South from Chhimmo Sahna Mandi Bahauddin Road. People of the village travel on Buses,Vans from Rohiwala Stop or Villages own Van Stop. They also travel on Train after riding from Aala Railway Station which is almost 5 KM from the village. Motor Cycles and Cycles are very common in the village which are used to go towards their lands or near by areas.

In the village Television, Radio, Tape Recorder, VWirless Phones and Mobile Phones with services of all the Telecom companies are present in almost every house. Few homes in the village also possess COMPUTERS in them very rare people use internet.

Land of this village is very fertile almost every crop of the world can be grown here.People use peter engins for irrigation purposes. Major crops of the village are

Problems of the Village’s People

As the Village is small so basic facilities are absent  No hospital, No Markets,No college for Boys or Girls therefore peoples especially females have to face many difficulties in order to fulfill their daily or occasional necessacities. Main problems of the village are as under.

The most promanent problem of the village is the removal of wastewater of homes and rain.In the absence of severage system some people of the village has to face problems like accumulation of rain water in front oftheir houses, when the LAKE (chhapparr present in the center of the village) is filled with water it come out in the streets this not only paralyse life in their homes but also a source of many diseases like MALARIA,CHOLERA and SCABIES etc.

Unlike other nearby villages Jagirdari system is notat its peak but some roots are there in this village , one example occurred few years ago when all the JUTT bradary decided to punish  Kami brodery because they were becoming disobedient unfortunately some of them come under this violence but now situation is changing with the passage of time.

People of the village are not very rich nor very poor. Except few houses all other can earn their livelihood easily those who are poor they are helped by the other village people in the form of Fitrana or other things in the name of God so fortunately every one is able to eat honourably.

This is another main problem faced by students especially by Girls as there is no institute after Matric sothe girls have to face great hurdle in their career so most of them stop their education because villagers does not allow their girls to go away from their homes,so most of the girls are undermatric if other want to carry on their education they do so either Privately through Punjab University or  through Allama Iqbal Open University Islamabad.

This is a very interresting  topic because when there is period of election especially of National and Provincial Assembly it looks that all the candidates are our own and they are in election only for our village because they solve all the problems of the village with their tongue in few minutes but as soon as they becomes leaders they even refuse to recognize their major supporters until the next election comes.

As it is already mentioned that most of the reports in Thana Kutiala Shekhaan belong to this village in which most are to pull legs or arms of the opposing party but the steeling of cattles is an important problem faced by villagers especialy JUTT families such Thieves have belong  to nearby villages whom names are not good to mention,in this village few black sheeps in young generation are also going on wrong path.